College movies have for decades been among Hollywood's most-tapped genres, and the focus of these films isn't just the students. For better or worse, college administrators also play a prominent, larger-than-life role in many of these films.

For as much as the films vary stylistically—from the relative innocence of the 1920s to the raucous partying of the last several decades—so to do their portrayals of deans, presidents, trustees and other administrators. Whether they were antagonists, sidekicks or love interests, we took a look back at some of Hollywood's best fictional administrators and the roles they played in their respective films.

Often imitated, never duplicated, John Vernon's Dean Wormer is the quintessential villainous administrator. Pitting students against the campus' powers that be is a common feature of college movie plots, but Wormer, in his plotting and scheming against the troublesome Deltas, is the Darth Vader of deans. There's a reason why the deans in more recent movies like Old School and Accepted seem like cheap knock-offs by comparison.

The dean of students at Marshall College, Marcus Brody (Denholm Elliott) is a loyal friend and patron to Harrison Ford's Indiana Jones. Portrayed in a serious manner in Raiders of the Lost Ark, the respected archeologist and National Museum curator takes on a comedic sidekick role ("He got lost once in his own museum") in 1989's Last Crusade. Even after Elliott's death, the dean of students' presence is still felt in 2008's Indiana Jones and the Kingdom of the Crystal Skull when his statue plays a vital role in a chase sequence.

In Back to School, business school dean Dr. Philip Barbay (Paxton Whitehead) clashes with Thornton Melon (Rodney Dangerfield), a rags-to-riches corporate clothing store founder who decides to go to college with his son.played. The primary source of conflict between the two is Barbay's Ivory Tower book smarts pitted against Melon's experiential knowledge of business, but Melon also strikes up a budding romance with his literature professor—also Barbay's girlfriend. Naturally, student-versus-administrator hijinks ensue. Another dean, Dean Martin (Ned Beatty), also gives Melon trouble, accusing him of academic fraud at one point in the film.

The dean (Snitz Edwards) in this 1927 silent film doesn't really have a name beyond his title. He describes his school, Clayton, as "athlete-infested" and assists the movie's scholarly main character in winning the girl. Don't you wish students still viewed the administration this way?

As a result of the film now being in the public domain, you can view it in its entirety on YouTube.

Touching upon Red Scare sentiments, this film stars Henry Fonda as Midwestern University English instructor Tommy Turner. Turner finds himself at odds with the school's trustees—Eugene Pallette's Ed Keller, in particular—after word spreads that he plans to read Bartolomeo Vanzetti's sentencing statement to his class. Apparently, the literary works of the time just wouldn't cut it when he needed an example of English composition. Academic freedom takes center stage as the trustees threaten Turner's livelihood over the whole debacle.

Adams College's Dean Ulich (David Wohl) is perhaps the most sympathetic administrator this side of the aforementioned College. In Revenge of the Nerds, he assists the nerdy Tri-Lambs in their war against the school's jocky frat, The Alpha-Betas. The dean even gets a bully of his own in John Goodman's Coach Harris, but would a real campus administrator really get involved in student warfare like this?

In this Abbott and Costello film, the comedic duo follow their sister, Molly (Martha O'Driscoll), to all-girls Bixby College after the school's dean, Larry Benson (Donald Cook), offers her a scholarship. The two become caretakers, much to the chagrin of Chairman Jonathan Kirkland, who threatens to foreclose if Molly isn't expelled. A totally rational solution, right? 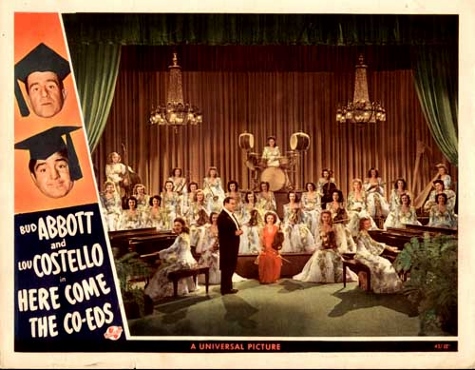 A much more serious modern college film, Frances McDormand's Chancellor Sara Gaskell is involved in a love triangle with the protagonist, English professor Grady Tripp (Michael Douglas), and antagonist, English Chair Walter Gaskell (Richard Thomas). The film takes a few dark turns, but ultimately wraps up with most of its characters in a better position. Answer us this, though: How many real campus administrators would be likely to own a piece of movie memorabilia like Marilyn Monroe's jacket?

In this remake, Dean Richmond (Larry Miller) is an insulting, but more-bumbling-than-menacing, antagonist to Eddie Murphy's Professor Sherman Klump. Then again, what administrator wouldn't antagonize a professor if their failed experiment cost their department nearly all of its funding? By the time the sequel rolls around, however, Richmond has pulled a 180 and become a friend to Klump.

By all accounts, Jordan Charney's Dean Yager should be reviled. He kicks Doctors Venkman, Stantz and Spengler off campus right when they're on the verge of a major discovery that probably would have brought the unnamed New York City university a great deal of funding. However, his decision to do so leads to the formation of the Ghostbusters and ultimately results in the city being saved, so it's not so bad in the end, except for the fact that his department and university as a whole can't share the spotlight for the scientific breakthrough.

Would you like to see more education news like this in your inbox on a daily basis? Subscribe to our Education Dive email newsletter! You may also want to read Education Dive's look at how the higher ed business model might change over the next decade.

Discover announcements from companies in your industry.