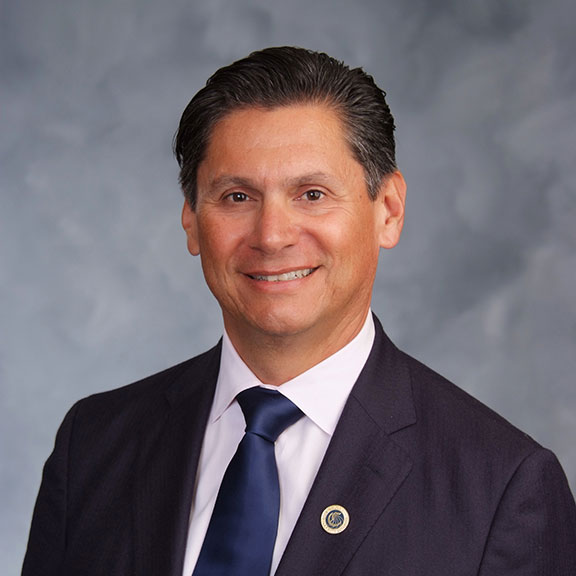 I'm going to wake up every morning and push in the direction that I think is best for our students, our state and our nation.

An Army veteran and product of California Community Colleges, Oakley sees his mission as simplifying the path to completion for all students, and particularly those with similar lots in life to his own.

As Superintendent-President of the Long Beach Community College District, he partnered with the Long Beach Unified School District (LBUSD) and California State University, Long Beach (CSULB), to launch the nationally recognized Long Beach College Promise program, which puts students on the path to college and grants them one year of tuition-free enrollment at the community college and preferred admission at CSULB.

Best known for emphasis on equitable success for all students, regardless of background.

Coming out of high school, California Community Colleges Chancellor Eloy Oakley “was like many of the young men and women that we serve in our colleges — I really didn't know what to do. I was a pretty good student, and I was recruited to play football … but even though I had gone out and made a commitment to Pitzer College and paid my enrollment fees, I never wound up going on the first day of class, because like many students,” Oakley said he didn't know how to navigate the process — or pay for his education.

So instead of college, Oakley turned to the U.S. Army. By the time he finally enrolled in college, he was a husband and a father, and part-time enrollment around his work schedule seemed the only feasible option.

At Golden West College, Oakley said he found some confidence and got a chance “to meet excellent people … who really took an interest in me and gave me some opportunities,” including a part-time faculty appointment.

“That experience, both as a student, as an employee, as someone who came from the military and didn't know how to navigate higher ed, that experience really shaped me and really gave me the impetus to stay in the community college system,” he said.

But not before trying his hand in private industry, “Because, you know, having an MBA, people I was talking to suggested you know you should try that, you should make some money.”

“The reality was I was going to bed at night wondering why I was selling insurance, and eventually a good friend of mine made me aware of Oxnard College, and I went back into the system,” he said.

His experience as a vice president at Oxnard College, which served “a lot of students of color, and a lot of first-generation sons and daughters of migrant farm workers,” made Oakley acutely aware that “for the majority of Californians like me or the young men and women who were going to Oxnard College, the only way they had was community colleges.”

For many of the students in the community colleges — like Oakley himself — college “just wasn't in the cards, or if it was in the cards, it was because they were very lucky.”

“It just increasingly made me aware of not only the challenges that students of color and first-generation students face, but the fact is that a lot of those challenges are challenges that our colleges or our federal policies or our state policies have created,” not any fault of the students or their families, he said.

“This was not the fault of the students, it was not a matter of their zip code or their economic status, it was something that we created, intentionally or unintentionally,” said Oakley. “If we’re going to be successful as a state or as a nation, we’ve got to have more [disadvantaged students] be represented in higher education outcomes.”

Oakley said that as a nation, we’ve reached “the critical junction we’re in where these colleges are serving the role as gateway to the kinds of students we need, the kind of people we need to push forward our economy, and we’re not going to get there without community colleges.”

“I’m no different than most of the 2 million students that we serve in the California Community Colleges. The only difference is that I got lucky. I was lucky to come across people who guided me, who told me how to navigate the system of higher education that I’d gotten into, who provided me employment when I needed it,” he said. “I just believe that we need to build a system that doesn't rely on a person’s luck, we need to build a system that relies on a person’s willingness to invest their time and take risk to get into higher education.”

And he’s vowing to “do everything I can to advocate for our students of all stripes — all of our students regardless of whether they’re first, second or third generation, low income or middle income, regardless of where they’re from, they should have an opportunity to succeed. They shouldn't have to be lucky to succeed — we should remove luck from our system and ensure that everyone has a real opportunity, [and] I’m going to wake up every morning and push in the direction that I think is best for our students, our state and our nation.”

One of the things that most bothers Oakley, he said, is how easily “people who have the security of having a college degree … solid resume, great benefits,” pontificate over “who should have a degree and who should not have a degree.”

“There’s been huge a push to greater access to higher ed for more people, there’s been debate over whether everyone should go to college … sometimes very smart people talk about whether or not some students really need to worry about college,” he said, which he thinks is wrong.

“We can argue every day about whether degrees are the appropriate currency for how we should measure skills and talent … but it really bothers me when people in one socioeconomic status start to debate what others who are in a very different socioeconomic status should or shouldn't do. I think that’s the wrong direction, I think it’s very demeaning.”

Oakley believes that as long as students are “willing to [put in the work to succeed], we need to have a system in place that allows people to get into higher education and navigate the system to completion.”

“At the end of the day, we need to try to simplify these things and get down to the fundamentals of providing people the opportunity to move from one socioeconomic class to another and allow them to advance in society and the economy,” he said.

“I just feel very blessed to wake up in the morning and have the opportunity to make a difference, and hopefully when I look in the rearview mirror, there will be a difference that was made.”

In a recent letter Governor Jerry Brown called on Chancellor Oakley to “take whatever steps are necessary to establish a new community college that — exclusively — offers fully online degree programs.” Oakley has already set plans in action to start following through with the request.

View all | Post a press release
Bichronous Virtual Learning, Done Right, Drives Superior Outcomes
From Blueprint Prep
The University of Nottingham Drives 21st-Century Data Literacy with Gale Digital Scholar Lab
From Gale, part of Cengage Group
Fifth Third Bank Surprises Families of Babies Born May 3 With $1,053 for College Savings
From Fifth Third Bank
Industry Dive publications win 6 National Gold Azbees – most of any publisher
From Industry Dive
Editors' picks
Latest in Higher Ed
© 2022 Industry Dive. All rights reserved. | View our other publications | Privacy policy | Terms of use | Take down policy.
We use cookies to optimize your experience on our website and for analytics and advertising purposes. By continuing to use our site, you agree to our cookie policy. Learn more
Accept